“A vortex can be seen in the spiraling motion of air or liquid around a center of rotation. Circular current of water of conflicting tides form vortex shapes. Turbulent flow makes many vortices. A good example of a vortex is the atmospheric phenomenon of a whirlwind or a tornado or dust devil. This whirling air mass mostly takes the form of a helix, column, or spiral. Tornadoes develop from severe thunderstorms, usually spawned from squall lines and supercell thunderstorms, though they sometimes happen as a result of a hurricane.”

Gallery of Flow Visualization from the U. of Colorado

A jet in crossflow
exhibits a shear instability. Visualized with dye in a flume.

From Album of Flow Visualization, THTLab, the Uni. of Tokyo

Cerebrospinal fluid, visualized in a laser light by fluorescent particles. Image is taken in IfU lab.

Jet in the cross-flow or simply the fountain on the lake of Geneve: 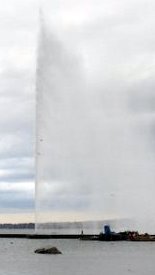 The physics of a tennis ball, watch the movies and see the wakes of spinning balls as compared to the non-spinning ones.

In addition to this post, the Art of Science competition also includes the beatiful visualization of:

These images contain top and side views of the wake produced by a rigid plate pitching about its leading edge in a uniform flow (flowing left to right). The leading edge of the plate is hinged to the trailing edge of a stationary symmetric airfoil. The wake is visualized using fluorescent dyes that are introduced through a series of holes on each side of the airfoil support. Twice in each flapping cycle, a horseshoe-shaped vortex is shed from the top, bottom, and trailing edges. The vortices become entangled to form the chain-like structure shown here. Studying such wakes is believed to be important for understanding the mechanisms of thrust production in fish-like swimming.

Tornado pictures:
an example from http://www.weatherstock.com/tornadocat3.html#TTT00

Filtered Luminosity photograph of bow shock detached to a Mars Pathfinder aero shell model, scaled down 1:25.6 and measured in X3 Expansion tube of the Centre for Hypersonics in the the University of Queensland. The flow properties : Mach 10, 8.1 km/s and the photo is made by one of our recent PyPIV/URAPIV users: Dwishen Ramanah (you can ask me for his contact e-mail).

Sand storm in Iraq (the source is here)

From the Gallery of fluid motion on www.EFluids.com – tip vortex behind an airplane:

One more from Flickr (press on image to see the original one).